This will be the third week of this weekly ritual. I hope some people are starting to enjoy the process as much as I am. However, I would like more engagement by other bloggers/ authors or writers. My answer to this is time-frames and deadlines. For those who sign-up to my email listing below, I will send the reminders.

If you missed last week,  here it is or the week before.

I want to get people involved, if we can get enough traffic, hopefully some cash prizes can be organised – to make it more interesting.Sunday Short Story – a short story on Sundays. In the form of poetry or a short story with a fully developed theme. You can: choose to join and share yours; or read mine – either way you’ll be participating in the weekly event.

The idea behind it is to think outside your major project or genre. Being completely absorbed by the one project/ theme seems daunting and frustrating. I feel it could be like music; you can love classical but listen to a bit of rock to make you appreciate the finer melodies.

Here’s mine:Darkness into Light.Darkness into light. The boy’s eyes woke after Tom drove into him. He kneeled over the high school boy, ‘Oh, he’s awake,’ he said with relief.

All the houses in the Upper Cooma establishment were identical, every house built from the same floor plan and construction company; and playgrounds with empty swings and dog parks with overflowing rubbish bins. People ran from the houses ran to the scene, ‘what do you think you were doin’?’ A lady yelled at him, she was furious as the rest of the people were. It was the only interesting thing that happened in the neighbourhood all year.

‘I swerved from a cat on the road,’ Tom lied to the onlookers – he received a notification from an online dating site – the concerned adults saw threw it.  Tom was forty-eight, bold with rough remains of hair around the sides, he wore a white-collared Ralph Lauren polo and brown Levi jeans. In one hand was a cigar and the other held the keys to his ebony-black Porsche. After his wife took most of his fortune he inherited from his parents, he invested into Bitcoin and never crawled back to her.

‘Are you okay?’ Tom asked the child.

He tried to sit up but pain pierced through his elbow and hip, the boy started crying.

He stood to see the neighbourhood crowding around the scene. Men and women with their children; parents in pyjamas, women in business suits ready for work and men holding their newly born-child.

‘Has someone rung the ambulance?’ The elderly woman asked everyone but they shook their heads. The thought never crossed Tom’s mind. The lady pulled out the phone and called the emergency department, whilst Tom fell back to look at his car to see what damage it received. A few light scratches ran from hedge after hitting the boy and a flat tyre from the gutter. It was an expensive day for Tom and it was only nine-thirty in the morning.

Tom gazed over the crowd lingering around the injured boy but one lady stood out from them all. She stood higher than all of them, tanned skin like leather bag and wore flamboyant earrings of leopard patterns and peacock feathers that supported her long neck. Flavours of her strawberry and peach perfume formed saliva in his recently scrapped mouth. Her jawline was as strong as his porches front bonnet and a realisation hit him like the boy and the car; it was the lady he received the notification from. 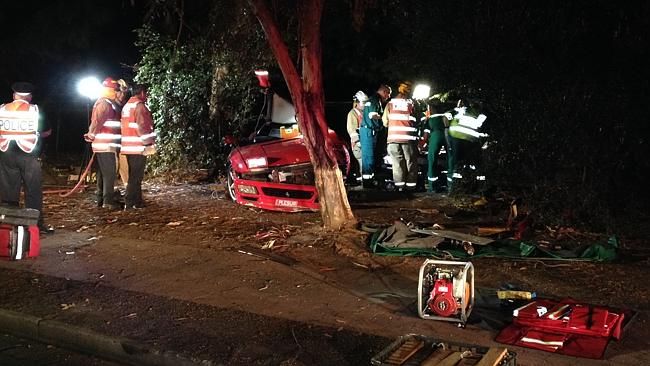 (Photo source – no one was severely injured in this photo)